Last week the extradition of Navinder Sarao to the United States was authorised by Westminster Magistrates’ Court and it will now be interesting to see what the High Court makes of the case assuming Navinder Sarao decides to appeal the decision. The BBC has an extremely detailed article looking at the circumstances of the allegation and it is worth a read.

Using an extremely simple analogy Navinder Sarao was able to make money by telling the market he wanted to deal shares that he had no intention to actually following through on. A closer to home analogy is that it would be a supermarket that suddenly received a wave of customers who brought items to the till to buy but never actually followed through with buying the goods but when prompted to pay simple left the shop.

That would be annoying for a supermarket but it has a very different impact when buying and selling shares. Unlike in a shop the vast amount of the buying and selling shares is done automatically by computers, the computers are all trying to watch what is happening in the market and are trying to buy shares milliseconds earlier to each other to make a profit on the price difference. By placing enough false orders Navinder Sarao was able to use the advantage of knowing that others will buy the shares based on those false orders and could then use that knowledge to himself make a profit.The argument that this is wrong is relatively straight forward, Navinder Sarao was purposefully trying to mislead other participants in the market (albeit mostly their computers and the algorithms they are programmed in them) and therefore creating uncertainty and disrupting the smooth running of that market.
However lets pause for a moment because I am personally not convinced that Navinder Sarao has done anything at least ethically wrong (or even legally wrong from a UK perspective!). In cricket there is a controversial method of wicket taking known as the Mankad. This occurs when a bowler not facing the bowler creeps out of his crease and the bowler instead of bowling a ball then runs that batsman out. Although perfectly legal tradition dictates you should warn your opponents several times that you will do this if they are trying to gain some advantage by prematurely leaving crease. The theory being a batsman should not be subject to a Mankad dismissal unless they are truly deliberately trying to gain some advantage.

I would suggest that the it could be argued that Navinder Sarao was performing exactly the same role in the market. Automated sharing dealing makes it very difficult for the ordinary man or woman on the street to ever deal shares and make a profit as computers are always trying to take a slice of money off your trade. You are never actually getting the best price when you make a deal. There is a legitimate argument that the activity of Navinder Sarao was the Mankad of share dealing. That he developed a system for deliberating gaming those automated computers and spoofing them. Someone would say that even if it is not liked by others playing the game it should be welcomed as at least it keeps everyone honest.It will be interested to see over the coming weeks whether we have any further insight into this in the extradition progresses. Similarly it will be interesting to see in the US if extradition is successful how the legal system there will deal with this offence and how seriously it will be treated. 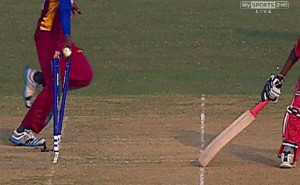